Posted at 08:47h in Article by admin
3 Likes
Share

Cervical disc replacement, also known as cervical disc arthroplasty (CDA), is now freely available to private patients in Australia. MBS funding was initially removed in 2006, meaning patients had to pay for the cost of the prosthesis themselves. Even though CDA had been approved by the FDA in July 2007, Medicare deemed there to be a lack of level 1 evidence at the time. In January 2013, the latest prostheses list was published and included several CDA models which have been in clinical use in Australia for over two years. 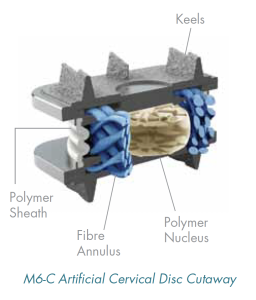 Cervical degenerative disc disease is a common pathological condition that may cause neck pain, shoulder and arm pain, sensory loss, motor weakness or headache. Most patients respond well to conservative treatment options, such as physiotherapy, traction and analgesic or anti-inﬂammatory medication. Surgical treatment can be considered when conservative treatment fails and can stabilise or improve in over 90% of patients1. Primary goals of surgical intervention are to relieve pain and to prevent progression of neurological deﬁcit. While surgery is accepted in cases of radiculopathy or myelopathy, controversy exists in cases of axial neck pain and headache.

Discectomy and fusion is the most commonly performed anterior cervical spine procedure and has been practiced since the 1950s. With fusion, a bony bridge between two vertebrae is promoted by the interposition of a cage or bone graft usually in conjunction with plate and screw ﬁxation.

Fusion has good early results, but in the long term patient satisfaction gradually decreases. Patients may develop recurrent symptoms in the years after surgery, usually at a level adjacent to the initially operated segment (ADD). The incidence of recurrent pain varies between studies, but occurs in around a third of patients. 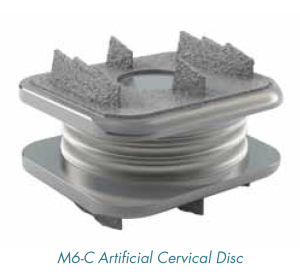 Fusion of the cervical spine has biomechanical consequences. Loss of mobility of one functional spinal unit increases the load sustained by the remaining units and places increased strain on the adjacent intervertebral discs. The yearly risk of ADD has been calculated to be around 2.9%. About two-thirds of these cases result in additional surgery.(2)

Currently, there is much debate about whether fusion is a contributing factor to ADD, or whether it is simply the result of natural progression of degeneration in an aging spine. However, the ever more widely held belief that increased stress at adjacent segments accelerates their degeneration has led to the development of a non-fusion operation for preserving motion and decreasing stresses.

Our vertebrae normally move forward, backwards and side-to-side, as well as rotate. These types of movements travel in either of two directions: translational or rotational. Translational planes have three types or “degrees” of movements (forward/backward, side-to-side, and up/down). The rotational axes have three degrees of movement as well (rotating, forward/backward bending, and side to side bending). When the spine is completely free to move in all these directions, it is said to have 6 degrees of freedom (3 degrees in translation and 3 degrees in rotation). The M6 disc (pictured) is an example of an unconstrained artiﬁcial disc allowing movement in all these planes, mimicking the function of a natural disc.

In the last 10 years CDA technology has been greatly improved. A number of devices are currently available, each varying in terms of materials and range of motion. In theory, CDA should reduce the likelihood of developing adjacent segment degeneration by maintaining normal disc kinematics. In biomechanical cadaveric studies, CDA has also been shown to maintain motion and mechanics within physiologic ranges at the index segment and decrease stresses on adjacent segments.

CDA and fusion appear to be equally effective in resolving pre-operative symptoms,3 but CDA may have the added advantage of preventing future symptoms by maintaining mobility. CDA may be more suitable in younger patients with generally less degenerative change in the spine. It is less suitable in certain ossifying conditions of the spine, trauma or rheumatoid arthritis.